After World War II, activity at Camp Stoneman declined. The Korean War rekindled the base for awhile, but in 1954 it was scheduled to be closed for good. It took a large part of the town with it. In 1960, the biggest auction in Pittsburg's history took place. The GSA sold 750 buildings for pennies on the pound for removal from the camp. Included in the sale to some 200 successful bidders were 342 two-story barracks buildings, 79 one-story administration buildings, offices, mess halls, officers clubs and infirmaries. All were gone by the end of 1960. Warehouses, chapels, and other more solidly constructed buildings were sold with the main garrison land, which included 1,000 acres.

For God so loved the world that he gave his one and only Son, that whoever believes in him shall not perish but have eternal life. John 3:16 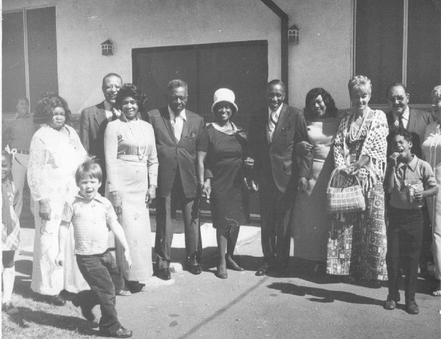 The History of Diane Ave Church of Christ goes back over 40 years, and that vision still continues today. Brother Ester was the preacher, followed by Brother Emmit Cook, then Brother Tim Luster, then Brother Charles Coleman, Brother Fred Ford, then Brother Ervin Byrdsong, then Brother Lamont Francies,  Brother Fred Ford and currently Bro. L.R. Stevenson..  The building was put together with the help of the East Tregalis congregation, two army barracks from the former Camp Stoneman.  The small church couldn't afford to pay a minister, so several other congregations sent monthly support.  Each weekend the Bayview Church of Christ sent men to do door knocking.  This was done to set up classes which at that time was an essential for growth within the church.

Diane Avenue Church of Christ has been a pillar of the community we have been is called to proclaim the Gospel of Christ according to the scriptures. Our mission is to maintain the worship of God, and to inspire in all persons a love for Christ, a passion for righteousness, and a consciousness of their duties to God and their fellow human beings.
We pledge our lives to Christ and our love for each other to demonstrate His Spirit through worship and ministry for the needs of the people of this church and the community

The location of the building during the war was called Camp Stoneman located in Pittsburg, CA. Camp Stoneman was the largest troop staging area on the west coast of the United States for units deploying to the Pacific Theater of Operations. Camp Stoneman was once the principal "jumping off point" for more than one million soldiers destined for operations in WW II's Pacific Theater, and again several years later during the Korean War. At the conclusions of the Second World War and the Korean War, Camp Stoneman was converted into a separation center, the function of which was to ensure that returning soldiers could be sent home as quickly as possible.